The annual Chilling Prospects report is published by Sustainable Energy for All. It identifies populations at risk for whom a lack of access to cooling threatens their immediate health and safety. It models risk based on a spectrum of cooling needs: personal comfort and safety; agriculture, food and nutrition security; health services and medicine. On this basis it categorises risk across four populations: rural poor, urban poor, lower-middle income, and middle income.

The year 2020 had two major features:

The report estimates that access to cooling is tightly related to the economic situation of individuals. This means that when poverty increases, it is much more difficult for the populations to access to cooling.

The following graph shows the evolution of the number of poor people in the world. For the first time in 20 years, projections show that global poverty is set to increase, with between 88 to 93 million people in the world becoming extremely poor, and 31 million people unable to get out from extreme poverty because of the economic situation related to COVID-19. All in all, this could represent 119 to 124 million more people than in the previous years. 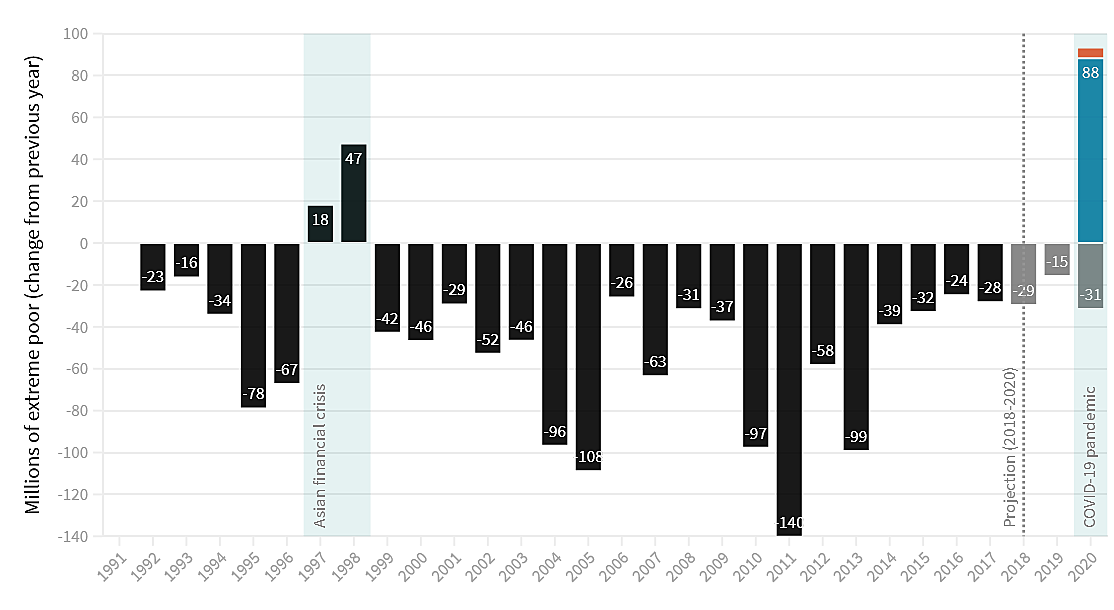 The analysis for 2021 shows that in the 54 high-impact countries (1), 1.09 billion people among the rural and urban poor are at high risk due to a lack of access to cooling.

People with lower-middle incomes can access cooling, but they will tend to choose devices that are likely to be inefficient, threatening energy systems and resulting in increased GHG emissions. It represents 2.34 billion people, according to the report.

In the 54 high-impact countries, at least 3.43 billion people still face problems with access to cooling, with global risks amplified by an additional 50 million people at high risk in 2021.

Some countries, such as Mexico, are not considered high-impact countries, even though some of its regions are at risk from lack of cooling. The report estimates that 31 million people may be impacted.

The increase in the number of people at risk due to a lack of cooling is primarily due to the poverty impact of the COVID-19 pandemic, which would have placed financial burdens on households and spending constraints on governments to deliver social services and encourage access to energy.

The three countries with the highest number of rural poor at risk in 2021 are India, Nigeria and Bangladesh, each experiencing a gain in the number of rural poor up to 21% for India and 12%for Nigeria. Despite steady strides in delivering energy access, electricity alone has not enabled those living in poverty to access the most sustainable cooling solutions.

The report is available by following this link.